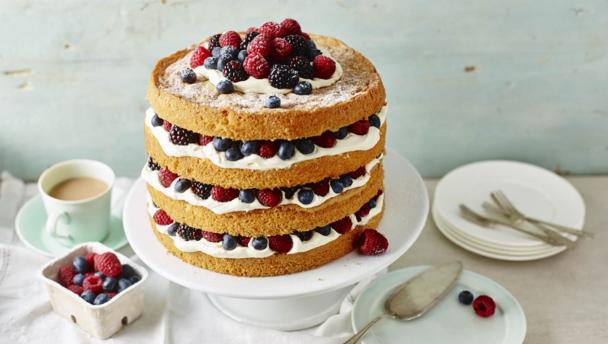 Big, bold and beautiful, this summer party gâteau is a real show-stopper. Add more fruits or even flowers for a very special occasion. You’ll need to make the sponge mixture in two batches as it does not work whisking all eight eggs at once.

For the Genoese sponges

Chilled in the fridge and covered, the sponges are best made and filled a day ahead.

If double wrapped in cling film, the sponges can be frozen.

It is important to get a lot of air into the mixture to create a light sponge. When folding in the flour and melted butter, be careful not to knock out any air from the mixture, and have your ingredients for the second sponge ready to go once you have made the first, so that the filled tin is not left standing for too long.

Press down each sponge layer as it is topped so that the gâteau holds together when cut.