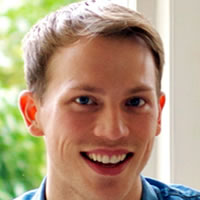 Jordan is an Irish chef, food stylist, consultant and the UK’s leading authority on Korean cuisine. He was winner of the K-Food Festival, a competition searching for the UK’s best Korean chef and was subsequently awarded an honorary ambassadorship by the Korean Foreign Ministry

Roasted hake and grilled mussels with leek and onion sauce

Michelin-starred chef, Brad, has been making great food since he was at school where his food tech teacher awarded him with his first accolade of best pizza in the class, but he’s come a long way since then!