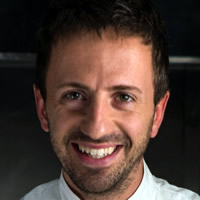 Raised in his mother’s kitchen in Abruzzo, Danilo travelled across Italy straight after culinary school and worked in two Michelin starred restaurants. In March 2012 he became Head Chef at the Italian Embassy in London cooking for some of the most influential people in Europe

In 2012 they quit their long-standing London careers and went on a six-month road trip of a lifetime across America to discover the secrets of American barbecue, eating at every BBQ joint they could afford, and becoming increasingly obsessed with the spirit of smoke and fire